“The end goal of the public administration reform is to make citizens’ life easier, and this is something we all need to keep in mind” said Eleonora Formagnana, Program Manager at the Delegation of the European Union to Montenegro, opening the round table “Priorities of the Public Administration Reform”.

Panel discussion on the priorities of the public administration reform was organized by the Institute Alternative and the Delegation of the European Union to Montenegro in the EU Info Center. 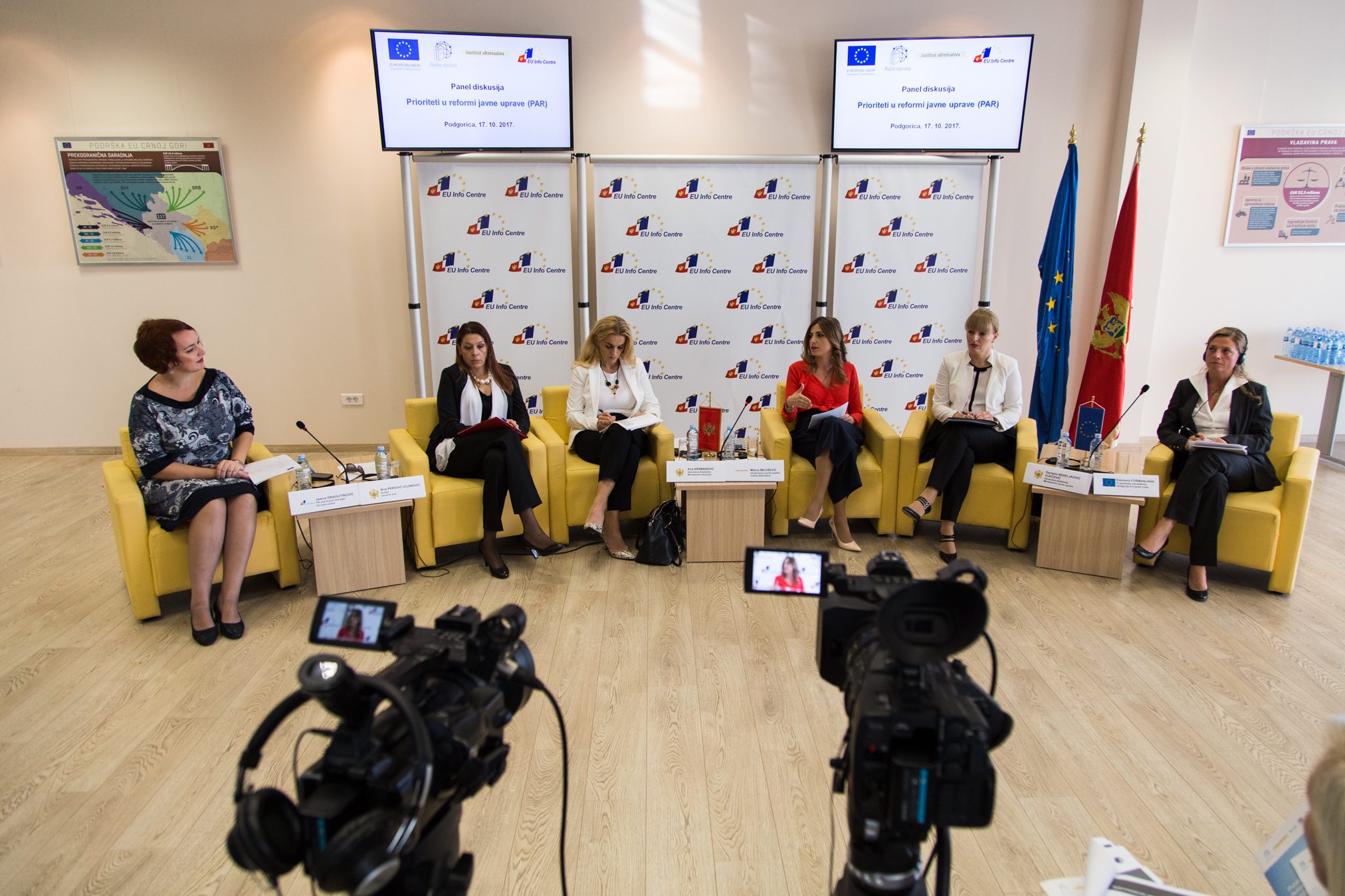 Milena Milošević, public policy researcher at the Institute Alternative, reminded that the Institute last June published a report on the implementation of this reform, within the project “Civil Society for Good Governance: To Act and Account!”, supported by the European Union.

“What is particularly visible in our research is the lack of accountability and mechanisms that aim to improve it. It suffices to visit the Ombudsman website and look at the latest citizens’ remarks on the work of the administration. For example, a citizen is not able to dispose of his property since 2003, i.e. for 14 years, because the Property Administration is delaying the procedure“, stated Milošević.

Milošević praised the operational conclusions of the Special Working Group on Public Administration Reform, consisting of representatives of the European Commission and our Government, which refer to the area of accountability. “Given that we were among the first to initiate the discussion on potential ways of improving cooperation between the State Audit Institution (SAI) and the Prosecutor’s Office and to call on the SAI to be more proactive, we find it particularly commendable that in the future more attention will be given to this inter-institutional cooperation and that the measures taken on the basis of cases brought by the SAI to the Prosecutor’s Office will be monitored.”

Danijela Nedeljković – Vukčević, Director General in the Ministry of Public Administration (MPA), said that the public administration and civil society often see results differently, which is also natural. “However, the operational conclusions of the Special Group, which are published on the MPA website for the first time, are one of the indicators of openness and readiness of the administration to work on the reforms seriously and transparently.”

“We need to work on raising awareness of the managers about how accountable they are in their work. Also, attention is focused on updating the Central Personnel Register, without which there is no quality human resources management. We are currently working on creating conditions for linking this database with the Ministry of Finance one on earnings, which is a prerequisite for effective monitoring of the number of employees and the realization of the optimization process”

Ana Krsmanović, General Director of the Ministry of Finance, said that civil society organizations must be controllers, and that pointing out the problems from the exterior sources will always be useful.

“Changes do not happen overnight, but I think we can increasingly see progress in the quality of administration. We do not have to have tectonic changes to improve the situation”, Krsmanovic said, noting that the introduction of new practices in work contributes to greater accountability and better services.

“When our name is on the paper we are signing, we will do more to fulfil the tasks, especially if there is a sanction for (non)execution of the task” said Krsmanovic, stating that the concept of managerial responsibility will lead to better quality of the administration.