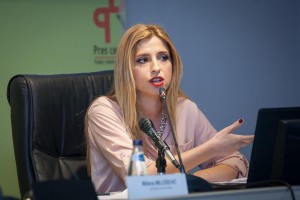 For the purpose of building election trust, besides dealing with great stories of democratic dialogue, it is necessary to tackle public policies in depth, so that, in four years time, we do not again witness sudden, short-term attempts of “fixing” the issues which have been previously largely neglected by politicians.

The 2016 is the election year and election trust is its leitmotif.

The attention is focused on the dialogue, aimed at ensuring conditions for fair and just elections. Even though the need for inducing trust in elections is unquestionable, there is a danger for decision makers to remain trapped in the game of symbols, which only sporadically reaches citizens, in their every day routines and stand-by mode until the Government pays damages in Limenka case.

Big stories hold the line. Political subjects of parliamentary dialogue. Control of use of public resources. Election process. It is true that systematic problems demand systematic solutions. Nevertheless, in this case, in a certain manner, the less is more.

So how does that work?

Audio Recording Affair is four years old, or, using political vocabulary – one election cycle. It represents a sterling example of interweaving of public resources and private party dowry, which has rightly gotten the extent of a scandal.

Institute Alternative has closely followed this romantic embrace of state and party from 2012 onwards, by monitoring civil service recruitment. This work is, however, anything but simple. Opposition politicians who may enter the so-called interim government, should not deceive themselves that in a few months they will manage to expose misuses of employment procedures in state and local authorities, regulatory agencies, public institutions and enterprises, which have been piling up for years. And the truth is, these are all different forms of institutions, “cohabitating” in the cumbersome public sector. There are no unique rules applicable to functioning of public institutions and organizations.

Maybe there would be some rules if the citizens, MPs and opposition advocates ever wondered what happened, for instance, with the Analysis of the position of the organizations performing public services, which should have been created by the Government several years ago, with the declared aim of fighting the so called agencification of Montenegro and deteriorating rule of law.

Maybe the new Audio Recording Affair would be less probable if the decision makers have paid attention to the warnings about the lack of preconditions for analogous implementation of The Law On Civil Servants And State Employees to the local level. Lack of complete data on the state of play in local governments is not a jaw-dropping surprise, given that both Institute Alternative and Association of Municipalities have previously warned about the legal insecurity regarding local servants, since the “analogous implementation”, as such, is too abstract.

Abstraction and legal loopholes are fuel for corruption, misuse of public resources and other affairs, which are subjects of big parliamentary dialogues. Nevertheless, they are only the aftermath of small omissions, which have been multiplying over time while suppressed by the “newspeak” of various political parties. On the other hand, it is not popular or desirable to talk about the ‘’small’’ issues, such as the data exchange between the Ministry of Finance and the Human Resources Management Authority or evaluation of public policies based on previously defined indicators.

The only opposition initiative aimed at improving public administration recruitment was based on a superficial estimate that grade point average during studies should be decisive criterion of merit-based employment. Plagiarism and 20 euro term papers have nothing to do with it.

The well developed debate on direct conditions for an efficient and transparent election procedure, such as the electronic identification of voters or maintenance of electoral roll, is an exception. However, for what is about to happen in the upcoming four years, everything else is equally important.

‘’Little things mean a lot’’ – call it a cliché, but it is nevertheless extremely applicable these days to the popular domain of building trust in the election process. It is true that this is about the electoral process, which does not float alone in a single point in time. On the contrary, it is gradually built over time, especially given contemporary notion of accountability and legitimacy of the government, which entails civic rights of asking and receiving feedback on progress in fulfillment of promises delivered to them.

Drafting of the new 2016-2020 Public Administration Reform Strategy in Montenegro is ongoing. This is an umbrella document for many activities tackling the complex relations between state, business and citizens, which Government plans to undertake in the period until the next elections. Institute Alternative submitted more than 40 pages of comments and recommendations to the Ministry of Interior, which is in charge of preparation of this strategic document. We have covered many topics, sometimes with nitty-gritty technical details, which pretty much fit into the “meta-narrative” on building the election trust. Unfortunately, the Government is persistent in refusing some of our key measures, such as reduction of discretionary rights of ministers and monitoring turn-overs of senior civil servants in post-election periods. Senior servants will make decisions on our behalf in the period between the two elections. Life will not be put on hold in the meantime – neither the interest of political parties and civil society for abuse of public resources should be.