The discussion announced following the initiative for dismissal of Director General of RTCG, Andrijana Kadija, is a confirmation of DPS’s intention to regain absolute control over RTCG and stop its transformation into public broadcaster, despite warnings from the European Union.

We remind that systemic, continuous and unprecedented attacks on RTCG began in December last year with unlawful dismissals of two members of the RTCG Council, Goran Đurović and Nikola Vukčević. Unlawful dismissals of the two Council members, implemented by the Administrative Committee and led by DPS MPs, Ljuiđ Škrelja and Marta Šćepanović, have clearly demonstrated that DPS will resort to any means in order to ‘cleanse’ the RTCG from those who are not to the party’s liking and to reclaim the media in question as a party bulletin. For this purpose, direct executors of government orders have been installed in the Council, who subsequently employed an obvious tactic of several months long undermining of the management authority, interfering in the RTCG functioning and ultimately voting for dismissal of the Director General.

New RTCG management, headed by Andrijana Kadija and Vladan Mićunović, remained dedicated to initiated reforms of the national broadcaster, despite the strong resistance they have experienced internally and external pressures. This does not work for DPS and the Government, because DPS and the Government only accept subordinate institutions, organisations and individuals without integrity, willing to undertake illegal activities for the benefit of the ruling party without any objections. Mimo Drašković, Council Member, belongs to this group and confirms his loyalty to DPS by attending party conventions as well. He finally tabled the initiative to dismiss the Director General, which was imminent for several months, thus fulfilling his role in this body.

In previous months, the work of RTCG has been actively obstructed by the Government of Montenegro as well, which has postponed the signing of the Public Broadcasting Services Agreement between the Government and the RTCG and the approval of the RTCG Collective Agreement, which was also noted with concern in the EC Report as part of political pressures on RTCG.

Dismissal of Andrijana Kadija would confirm that DPS and the Government will not allow establishment of institutions without party influence, that they are determined to directly derogate all institutions that make a step towards independence and that they do not leave space for persons with integrity to do their job in a managerial position, namely, that they knowingly undermine all pillars of a functional rule of law.

By dismissal of Kadija, the authorities would open up the space for the European Commission to seriously consider activating the balance clause, that is, to halt further provisional closing of chapters until substantial progress is achieved in the area of the rule of law, where freedom of media and freedom of expression are among crucial issues. The EC Report states, inter alia: ‘Initial positive developments on RTCG’s editorial independence and professionalism were challenged by instances of undue political interference and political pressure on its Council…’, with the overall assessment that Montenegro made no progress in the reporting period and expressed concern about the situation in RTCG. Therefore, dismissal of Kadija would represent a show of force and power at the expense of the rule of law, which calls for activation of balance clause more than the recommendation of four NGOs.

DPS against EU and US in new action of retaining contr... 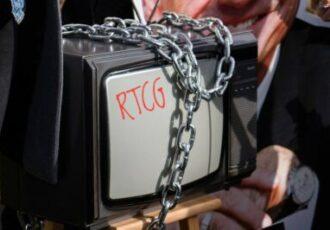