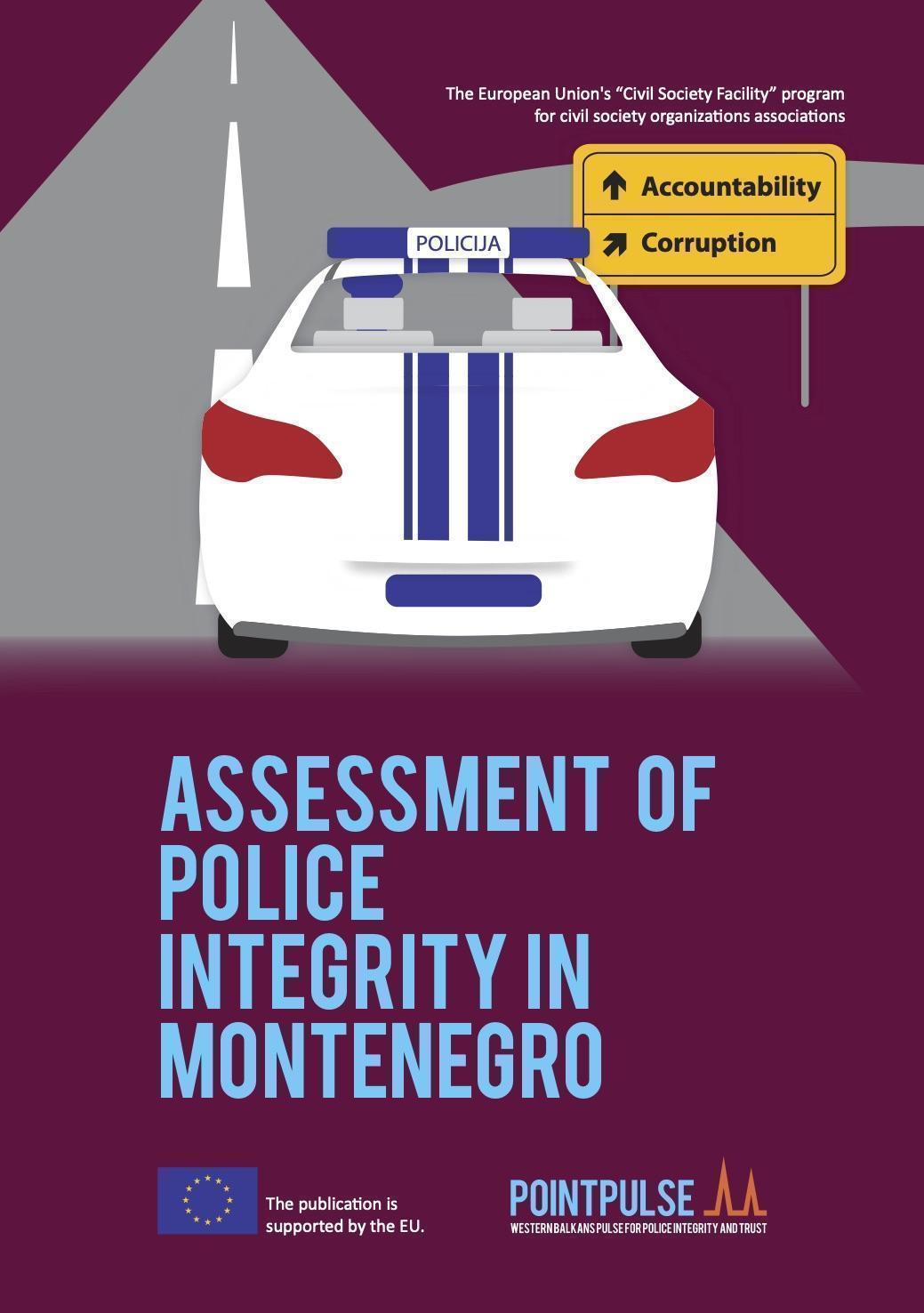 The integrity of the police in Montenegro has been compromised. The problems of bribery and misuse of office do not stand alone; there is also excessive use of force, passive professional behavior, extortion of statements, and political activity. Corruption is the second most common association of Montenegrin citizens when they are asked about the police, right after “security, safety and the protection of citizens,” and only 12 percent of the citizens believe that corruption does not run rampant in the police force of Montenegro. For the above reasons, the integrity of the police must become one of the priority areas of strategic further development of this service.

There is a complex system of internal and external control of the police, which is characterized by insufficient cooperation and information exchange between the authorities in charge of oversight, insufficient effects of their controls, conclusions and recommendations, and by the citizens’ dilemma concerning the right authority to which to report abuse, corruption or overstepping of police powers, resulting from presence of too many actors. Although some progress has been made, supervisory authorities have not yet achieved necessary efficiency in the implementation of their powers.

Reform of the Montenegrin police began shortly before the referendum on independence, through the enactment of the new Law on Police in October 2005. The Law on Internal Affairs of 2012 brought the Police Directorate back under the aegis of the Ministry of Interior, which resulted in reduced independence of the police concerning management and decision-making in many areas, from human resources and finance, to transparency.

In this report we have presented the results of a study which aims to contribute to the improved functioning of the police, and increase the public trust and confidence in its work, which – as in all the Balkan countries – stands at quite a low level.

The report is divided into six thematic sections: the first three relate to the issues of transparency, depoliticisation and management of human resources. The following three chapters deal with financial management and public procurement and the repressive measures for establishing the liability of employees, and analyze the work and results of all the actors in charge of internal and external control of police work. Each chapter is followed by recommendations for improvement within the specific area.

(i) Although important steps have been taken in the area of management of human resources, such as the tightening of criteria for appointment to leading positions in the police, the key problems that still remain are: the lack of strategic approach in the policy of rationalization of the number of police officers, discretionary decisions of the heads concerning hiring and promotion, superficial performance evaluation, and a weak link between reporting on the work, evaluation and promotion.

(ii) Despite the fact that police officers are prohibited by law from political activity, membership in political parties and presence at political rallies, these practices have not been suppressed and the citizens assess the Police as a highly politicized state authority. Lack of transparency when deciding on dismissal from leading positions, lack of practice of providing a public explanation of the reasons for such dismissals, and a flawed legal framework regulating these procedures, also contribute to the politicization.

(iii) The institutional framework for control of police work has been developed and is now almost complete, in terms of the existence of legal possibilities for effective control; however, there is still much room to introduce a number of additional controls by all the supervisory authorities, and to improve the enforcement of preventive and repressive measures to heighten the level of integrity of police officers.

(iv) From 2013 until 1 October 2015 the State Prosecutor’s Office worked on 62 cases involving police officers, of which only 19 resulted in filed charges. There are no available results concerning the prosecution of high-level corruption in the police. During the same period, the Courts had 47 cases pending against police officers (not including corruption cases). Although there were 16 final Court decisions, only three persons received a sanction in the form of a prison term.

(v) Internal Control made significant progress when it comes to controls carried out on its own initiative, of which there were 76 in 2014, with 26 identified irregularities and a total of 6 cases submitted to the State Prosecutor’s Office. However, out of a total of 500 asset declaration cards, it had so far controlled 140 and found irregularities in two cases. Out of 154 complaints from citizens submitted to the heads of organizational units in 2014, only two were found to be grounded. In the same year, the heads initiated disciplinary proceedings for grave violation of official duty against 87 officers and imposed 55 disciplinary measures in the form of fines. In one year, the organizational units of the police also filed criminal charges against seven police officers and initiated misdemeanor proceedings against five. The Ethics Committee found that during the past sixteen months the Police Code of Ethics had been violated at least 55 times.

(vi) On average, three percent of the annual cases of the Protector of Human Rights and Freedoms refer to police officers. The procedure for the election of the Protector does not enable selection of the best candidate. Although parliamentary oversight of the police has been established, the application of control mechanisms is infrequent and the impact of the conclusions and recommendations of the working bodies of the Assembly is insufficient. The Ministry of Interior has improved its implementation of the Law on Free Access to Information, but an insufficient number of enactments concerning the police have been opened for public discussion and citizen participation.