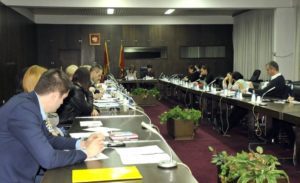 The question rightfully arises: What are the results of our work and have we been able to influence the decisions of the Government? A sincere answer would be as follows: Our results are thin and we’ve failed to achieve any significant impact. Why is it so? Here is the answer based on a recent example.

Eighteen months has already passed since the Council for Development of NGOs operates in the present composition. The Council which is tasked with, inter alia, “providing opinion to the Government on draft legislation governing the institutional and normative work of NGOs, with the aim of creating an enabling environment for their development and operation”. I was appointed as a member of this body upon the proposal of a group of NGOs, as one of 11 NGO representatives sitting side by side with 12 Government representatives.

The question rightfully arises: What are the results of our work and have we been able to influence the decisions of the Government? A sincere answer would be as follows: Our results are thin and we’ve failed to achieve any significant impact. Why is it so? Here is the answer based on a recent example.

The argument that the Council is the body which needs to receive all the information relevant for its work so it could be able to re-evaluate and discuss it prior to advising the decision-makers didn’t help. Recalling that the previous debate on the Draft Law on NGOs was held seven months ago didn’t help either. Nor the recollection that we are requesting the debate on the Law on NGOs, and not on the Law on Administrative Fees (although the treatment of NGOs under this Law could be discussed as well).

At the beginning of the session in question, I stated that it’s been a year since the strategy of exhaustion, obstruction, and marginalization of requests of NGOs is being pursued. This strategy is being implemented by the Government representatives who wish to transform the Council into the “Government’s commission for justification of the decisions of the Government”.

How this Strategy looks like when put to work clearly shows the procedure NGO representatives need to follow if they wish to place an issue on the Council’s agenda. Namely, the Government representatives in the Council stubbornly insist that it is necessary for at least three NGO representatives to jointly sign a proposal and file the original in the Archive of the Government in Podgorica. During an hour-long debate at the Council, I had to draw the route of three members of the Council from three different Montenegrin cities which are obliged to travel and “collect” signatures and then physically carry them to Podgorica.

In other words, the Government representatives have been refusing to acknowledge the possibility of submitting the proposals by the NGO representatives via e-mail for a year and a half now. Bearing in mind that it’s 2016, their stance on this issue could easily appear in the “Believe It or Not” section, especially since the entire communication between the President of the Council, the Government Office for Cooperation with NGOs, as well as among the members of the Council takes place via electronic list (e-mail). Now, everything that is permitted to them (from the Government) is forbidden to us from the NGOs. Discrimination at work.

In the end, we had to put a stop to this nonsense (or at least try). We requested that the proposals submitted in accordance with the Rules of Procedure are put on the agenda, but also that the Council urgently adopts the interpretation that members from NGOs are allowed to submit amendments to the agenda via e-mail. They heard us only when we unanimously threatened to leave the Council session.

One of the most important debates, in the ocean of absurdity, conducted in the present composition of the Council, was the one on the draft document entitled “The Analysis of the Institutional Framework for the Exercise of State Administration Competencies in Connection with the Development of NGOs”. The two groups of representatives outvoted each other during this session as well. At the end, the document was not adopted because there was no majority vote for either side. Consequently, the voice of the Council on this issue remained silent before the Government.

Unfortunately, the Council was not able to deliberate in a timely manner on reports on the implementation of obligations related to development of civil society within Chapter 23, since the reports were submitted to the Council only after being adopted by the Government. This practice hindered the possibility of proposing conclusions and recommendations to the Government, therefore, the debate on this issue never occurred.

Now, we are trying to ensure that the last year’s Performance Report of the Council is not only the collection of bleak, bureaucratic statements copied from the minutes of the sessions. We want the report to encompass answers to the questions like: How many proposals came from members of the Government? How often did the Government representatives speak at the sessions? How many proposals for amendment of the agenda were rejected? What are the topics we failed to cover and why?

For instance, the state Budget Bills for 2015 and 2016 and the amounts allocated for NGOs were not discussed at all. The Ministry of Finance is blocking and obstructing our work in different ways, thereby continuing the old practice from the era of the previous Council. Failure to provide us the precise information on the fate of the Law on Games of Chance is only one example of these obstructions. About the so-called Civil Society House some other time.

Text was originally published in the ,,Forum” of daily Vijesti