In Slovenia and Croatia, EU member states which were once part of Yugoslavia, there is no policy of granting housing loans to public servants and officials

Information that 96 officials gained apartment or housing loan on preferential terms since 2016 is only the tip of the iceberg, since more than a 13,6 million euros were spent on those purposes since 2009 to 2018, according to an analysis of ‘’Dan’’ and NGO Institute Alternative. According to the Year-End Budget Reports starting from 2009, the Government of Montenegro ignored its own data from the Social Housing Strategy, which show that every 10th household in Montenegro are subtenant families, meaning that 18,425 households with at least 60,000 members do not have their own house or apartment, while at the same time, wealthy public officials are getting a second or third apartment.

It is not completely revealed to whom, under what conditions and based on what criteria this money was distributed, thanks to a decision of the Government’s Housing Commission to classify information as “internal”. Government’s General Secretariat refused to answer the questions from journalists on what legal basis was the information on housing loans given to the officials classified as confidential and who made that decision, having in mind that 13 million euros of public money was spent for these purposes.

Information about which public officials and under what conditions received apartments and housing and consumer loans from citizen’s money was repeatedly requested by ‘’Dan’’, NGO Institute Alternative and MANS. This information was requested from the Housing Commission, Government, General Secretariat and Property Administration, but the answer was always the same – it is a greater interest to hide which officials received such assistance, and resolved their housing needs at the expense of citizens.

One of the most specific answers was signed by the current Minister of Defense, Predrag Bošković, while he was president of the Housing Commission. He explains that information about loans to public officials is classified as confidential because their publishing would ‘’result in serious citizen concern and justified mistrust in the work of Government’s Housing Commission, as an institution in charge for acting on behalf of the Government of Montenegro’’.

Former Croatian Information Ombudsman Anamarija Musa, explicitly said for ‘’Dan’’ that the information about which officials received a housing loan from the state is a public matter and must be publicly available.

There is no reason to protect the information why someone is privileged to get something that others do not have the right to get, funded by public money. In Croatia, this policy is mainly abandoned. Earlier, there was distribution of subsidized loans for certain groups of citizens (university employees), and today there is still such policy for police and military, e.g. Croatian Home Guard – says Musa.

However, Croatian Ministry of Home Guard publish lists of persons who are qualified to get an apartment or a loan. The Croatian Parliament also published lists of MP’s expenses showing who is using funds for housing needs, if they do not live near Zagreb.

Musa points out that the allocation of apartment or preferential loans to certain groups of citizens should be limited to the maximum and allowed only to those groups or persons who, due to the nature of the job, status or merit, need this type of help and when there is a good reason. She believes that loans and apartments should be given to those who perform dangerous jobs or need to keep them in the system. 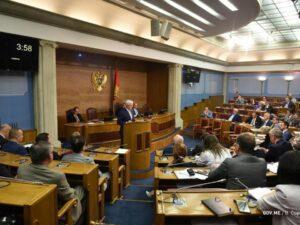 – I don’t understand why would public officials get these privileges. They hold these positions only temporarily anyway. If this was allowed, then it would mean that the smartest thing for any citizens would be to get hold of some official’s position, settle their housing and other financial issues, and all their problems will be solved. That’s not the point of politics, it’s not the point of public service. They should work in public interest, not for their own interests’’, says Musa.

In the EU member states, officials cannot count on housing benefits, as they can in Montenegro. The Croatian Government did not respond to our questions, but Slovenia shared information on this issue. Slovenian officials and public servants cannot count to resolve their housing needs at the expense of citizens and the most they can be is subtenants in state apartments.

Official statement of the Government of Slovenia explicitly declared that the policy of granting housing loans to public servants does not exist in that country.

They said that state apartments are allocated to civil servants and officials in accordance with the Housing Rulebook, meaning that persons from state authorities are allowed to rent an apartment from state and pay rent.

Beneficiaries of the distribution of apartments are civil servants who are employed in state authorities, with the exception of police and Slovenian armed forces and officials. General condition for the allocation of an apartment is not being owner of any property, which allows the beneficiary and persons who will live with him normal use at distance of 60 km from the place of employment. Due to the nature of the job, distance is 20 km for servants. Official housing is granted on different basis: civil servants and servants during their period being on duty, on tender for the period of work in state administration, without tender for period of 3 years, for the purpose of urgent official needs for a period of two years with a possibility of extension – as stated by the representatives of the Government of Slovenia.

Ministry of Public Administration of Slovenia states that they do not publish data on users of official apartments.

Officials in Montenegro live in state owned apartments for a while and eventually buy them, under preferential terms, as the President Milo Đukanović did. He bought an apartment of 114 square meters in Gorica, the exclusive area in Podgorica, and according to the earliest data on his incomes from 2005, he had a salary of 456 euros. Current Prime Minister Duško Marković received a loan of 20,000 euros from the state, while former Prime Minister Igor Lukšić borrowed 45,000 euros from the state on preferential terms.

Recently, Prime Minister Marković even stated at the Prime Minister’s Hour that the allocation of apartments and housing loans to official is a common thing.

“I guess it is normal that state as an employer (how strange!) provides a roof over their heads under preferential terms. The thorn in your eye are public officials, so you phrase the question in a way that made me think that Montenegro would be a promised land if public officials were homeless”, said the Prime Minister.

Institute Alternative has submitted an initiative to the Constitutional Court of Montenegro to review the constitutionality of the provisions of the Law on the Maintenance of Residential Buildings, which the Government uses as a basis for decisions on resolving officers’ housing needs. They think that the disputed provisions ‘’artificially keep alive’’ the by-laws regulating issues outside this law, which are the legacy of the previous system.

This NGO tried to start a petition with partners from the civil sector in order to remove the secrecy classification from the Housing Commission acts and finally find out which officials received apartments or housing loan since 2006. Ministry of Public Administration refused to give citizens the opportunity to express an opinion regarding this proposal, by not granting its publication on the ePetition portal.

Benefits to officials are not a common thing

During one of their visits to Montenegro, a representative of an international organisation said that giving loans to officials is not common thing. Asked if there is policy of allocation of apartments and housing loans on preferential terms in EU member states, one representative said they do not know of such a policy.

“I know that in some states, civil servants (or some of them) have access to state-owned recreational or accommodation facilities, and that states provide employees statements on guarantee which lead to the loans on preferential terms by commercial banks. Nothing but this, and these policies are legacies from the past that the states are increasingly abandoning “.

Although generous to officials, the state made effort to limit to a maximum financial support to those in social need. Individuals in social need receive 63 euros, and families with five or more members approximately 120 euros per month. Social assistance cannot be provided by a person who, for example, owns land in an urban or suburban area regardless of square footage, has a meadow bigger than 60 acres or has more than two farm animals. On the other side, Minister of Labor and Social Welfare Kemal Purišić got apartment from state, although he already had one.

According to Mirza Krnić from ‘’KOD’’ organization, the state should help those who cannot resolve their housing needs without assistance. First of all because Montenegro is a state of social justice as stated in the Constitution, and secondly because this would make better living conditions for the most vulnerable and often socially marginalized groups of citizens.

-All government decisions favoring officials should be abolished and process which would additionally taxed housing should be improved through a series of measures in tax policy. Thus, the raised funds would be channeled to those who cannot help themselves and resolve housing needs. By doing so, society would express solidarity and efficiency – because a citizen who is respected by the state when in need, can contribute more to that same state – Krnić points out.

This article was prepared within the project ‘’Money Watch – Civil Society Guarding the Budget!’’ that is implemented in partnership with Institute of Public Finance from Zagreb and NGO New Horizon from Ulcinj. The project is financially supported by the European Union and co-financed by the Ministry of Public Administration of Montenegro.

This article was originally published in daily newspaper ”Dan”.